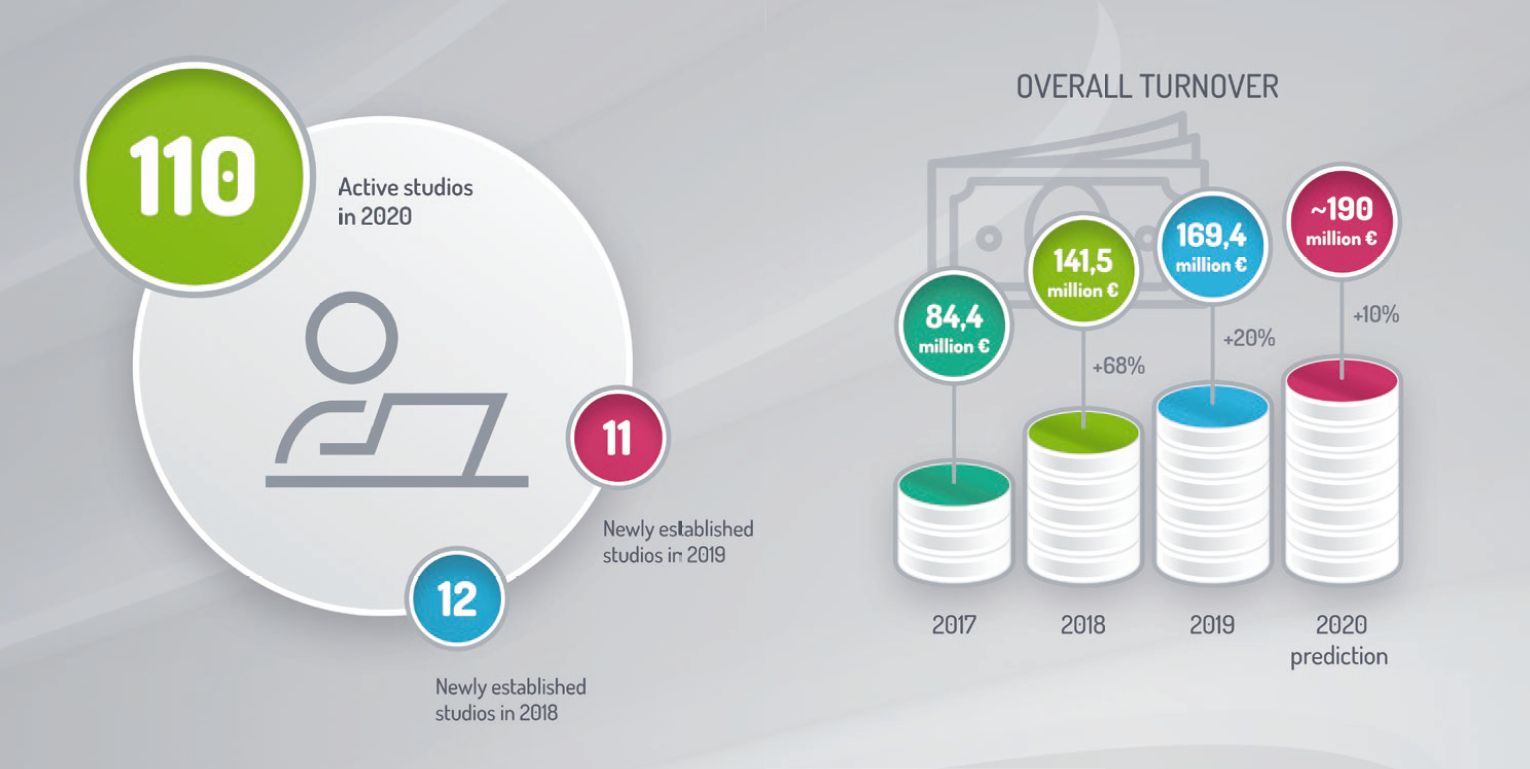 On Tuesday, June 23rd we held a public press conference presenting the findings of the study Czech Games Industry 2020. The conference was streamed live and you can watch it on our Facebook page (Czech language only).

The revenue of Czech game development companies has reached EUR 169.4 million in 2019, an increase of 20% compared to the previous year and nearly twice as much as the revenue in 2017. It is expected to grow by an additional 10% to reach a total of EUR 190 million this year. The Czech games industry is facing a shortage of qualified workforce, which is being subsidized by employees from other member countries of the EU. Findings were published in the Czech Games Industry 2020 study by the Czech Game Developers Association.

Czechia currently hosts a total of 110 companies, 67% of which were primarily focusing on PC and console platforms in the year 2019. The mobile market is a primary focus of less than half of those studios (41%). Czech game development studios are amongst the world’s top leading companies and Czech computer games are majorly successful around the world. Up to 95% of customers come from foreign countries, mainly the USA, Germany, Great Britain, Russia, and China.

„The games industry is a major sector of our economy and we need to support it in all areas, including education, investment, and equity. Interest in gaming is constantly growing and we expect it to grow even further in the future. However, to maintain the growth and take full advantage of the value the games industry brings, we need to increase the support from the government bodies both on national and European level,“ says Pavel Barák, the chairman of Czech Game Developers Association.

Czech game development companies employ more than 1750 employees, the majority of which are programmers (21%) and graphical artists (19%). Additionally, between 280-300 new jobs are created each year. Yet more than 60% of companies state that they lack a qualified workforce.

Education in the fields of computer game development is currently underdeveloped. Only a couple of Czech universities are focusing on computer games and the number of graduates each year does not meet the demand of a constantly growing industry. Studios then turn their attention to the international job market. More than half of the companies are employing at least one foreigner (mainly from the member states of the EU) and the average ratio of Czech vs. foreign employees for Czech companies is 29%.

The key success indicator for new Czech companies are investors and access to capital. The main source of equity is personal investments. Nearly half of the studios are completely financed without external investment, only 19% of studios received an investment in 2019. 14% of studios took advantage of non-financial support such as presence on gaming trade fairs or incubation programs, many of which were supported or organized by the Czech Game Developers Association.

Gaming Is Generating More Revenue Than the Czech Films Industry

The games industry is a major force of the digital economy. Digital distribution has seen significant growth and exceeded the retail distribution. It is also categorized as a cultural and creative industry and generates revenue multiple times higher than the Czech film production. However, the support of government bodies does not reflect the importance of the industry. The Czech games industry needs systemic support especially for visa accessibility, direct and indirect support for new companies, and longterm support of specialized education.

„Czech Game Developers Association is actively working with governmental bodies to extend the support of the Czech games industry. We can communicate the needs of the industry directly and help secure the economical climate where the industry can keep stable growth.“ adds Pavel Barák.

Continue
We use cookies to ensure that we give you the best experience on our website. If you continue to use this site we will assume that you are happy with it.Ok